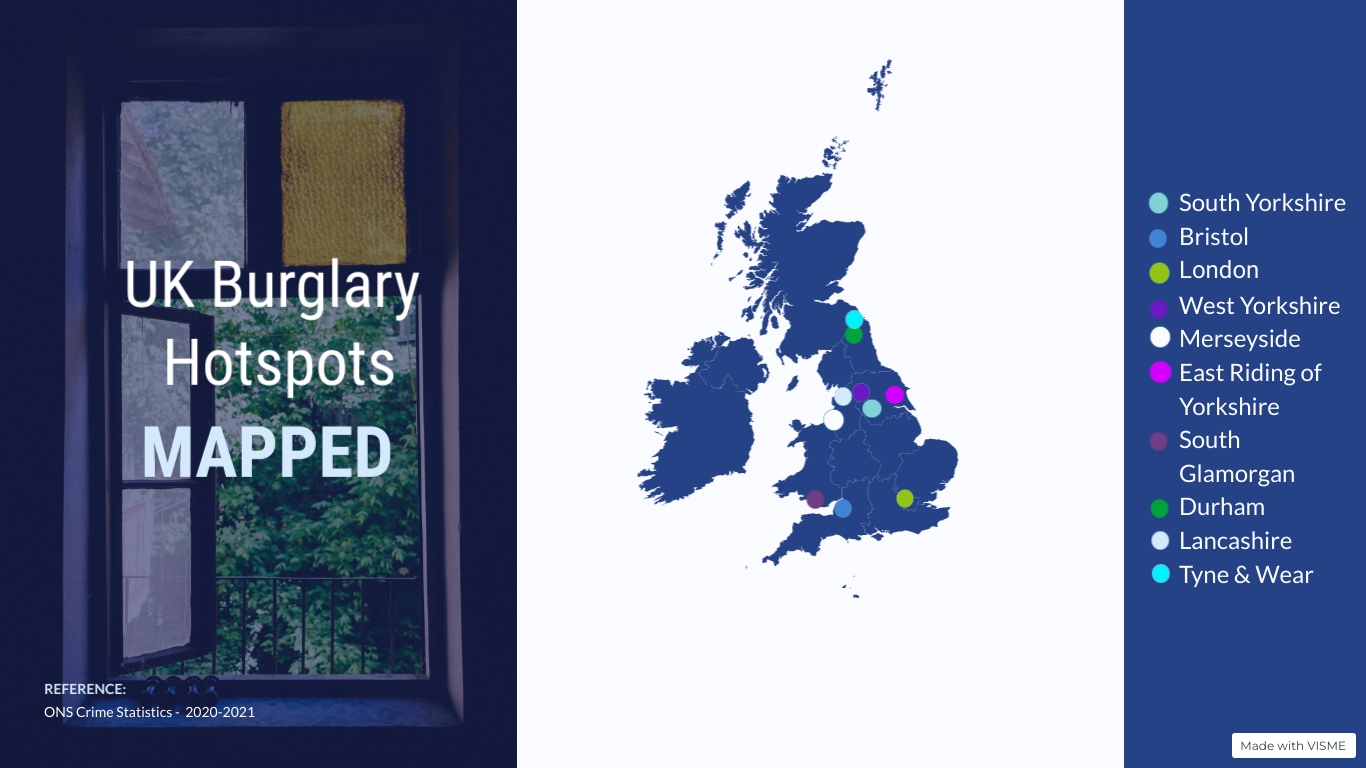 According to the most recent ONS figures, there were 258,594 criminal offences and incidents which involved burglary in the UK last year.

While this number has dropped in national terms from the previous year (with incidences of burglary rising sharply during the first national lockdown in 2020) it is still seriously higher than many of our European neighbours. What’s more, certain areas of the UK have not seen a decline in crime rates relating to burglary, and others have even seen an increasing trend over the last 12 months.

Researchers at ConservatoryBlinds4Less have used local crime data from the ONS to calculate the most commonly burgled areas, including the towns, cities, and council areas with the highest rates of burglary. They have also determined the least burgled cities and towns in the UK.

The 10 Most Burgled Places in the UK

How to Prevent Opportunist Burglaries – Our Top Tips

1. Don’t just focus on the night

Though many of us associate burglaries with the night time, many opportunistic and planned burglars strike during the day. This is particularly true during the summer months, when people tend to be out of their homes more frequently during the day time, or away during the holiday. The same is true for busy holiday periods, like Easter and Christmas.

Be wary that added security measures are taken into account during the daytime as well as the night. For instance, if you have an alarm, make sure it’s on when you leave the house in the day as well as when you go to bed at night.

2. Use curtains or blinds

Ensuring high-value items, like televisions, music equipment, games consoles or other electrical equipment usually found in downstairs areas are kept off display from wandering eyes can make all the difference.

Keep open kitchens, living areas, and conservatories kept off-display while you’re out using blinds and curtains. If you have a conservatory, orangery or room with glass doors or large windows, fitted blinds for bi-folding doors or roof blinds for conservatories can prevent potential burglars from spotting high-value items through your windows and attempting to break in to get them.”

3. Leave radios and TVs on if you’re out during the day

This hack is a simple way to prevent opportunistic burglars who may be looking for seemingly empty homes to target. Leaving music, a radio or a TV on low in a kitchen or living area can be a great audio deterrent for burglars, many of whom won’t take the risk of encountering someone in.

Dark back and front gardens can be incredibly inviting to burglars. Security experts recommend installing smart sensor lights that you can link to your phone. This way you will be alerted if lights near your home go off at unusual times. Sensor-based lighting is also more energy efficient than permanently leaving internal or external lights on.

Visual deterrents are a hugely effective way of keeping burglars from targeting your home. One study by Which? showed that 71% of burglars were put off by signs suggesting a home had wither CCTV or an alarm system.

If you use security camera or any alarm systems to keep your home secure, consider placing a sign or bell-box in plain sight at the front of your home. This is much more likely to keep burglars at bay.

Using gravel in your gardens or on the pathway to your home’s entrances is a great, simple way to deter potential burglars. Most thieves will want to work in complete silence to avoid detention – so something like this can stop them in their tracks.